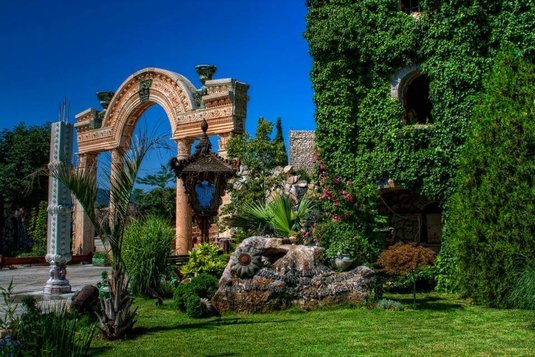 The Castle "In love with the wind" is located in the village of Ravadinovo - 3 km. from the town of Sozopol and 9 km. from Chernomorets. It is the child’s dream come true of its owner and builder - Georgi Tumpalov. It was founded in the distant part of 1996, when the construction of this stone fairy tale begins with the 24-hour work of the whole Georgi Tumpalov's family and workers from the village. According to the owner's view, the style of the Castle is Fairy, Enchanting. This is the secret of its magic impact – a dream to build a castle existing only in fairy tales come true. It was built completely of 20 000 tons of stone, specially extracted from the bowels of the Strandzha Mountains. The stone is marble (metamorphosed limestone), which is used everywhere – in the fence, the artificial lake, walls and towers, the chapel and the cellar. It contains traces of micro diamonds, which makes the castle change its colour – in the morning it has pink nuances, during the day, it becomes white and at full moon – it glows.

However, the thing that makes this castle unique is the fact it has the shape of a crest, which symbolizes trust, love and commitment in its construction and development. It is probably the largest building in the world in the form of a stone crest, measuring 75x32 meters and 29 meters in height - a sign of faith, love and dedication in its construction and development. "In love with the wind" has an amazing park with over three thousand species of exotic trees, plants and flowers. On its territory there are also several deep lakes with freshwater fish and waterfowl - white and black swans, pelicans and ducks. In 2017, just next to the Castle was built a modern aquapark. With its numerous water slides and attractive restaurants, additional entertainment, extensive green areas and a variety of services, Aquapark Neptune offers its guests a truly exceptional world-class experience.

Loved by some, abused and denied by others, the castle "In love with the wind" is an unique attraction not only for Bulgaria. It attracts with the same interest and admiration both Bulgarian and foreigners and allows immersion in a magical world in which the life-filled fairy tales open new worlds, create new wonders and touch with new experiences ... or as advised by Georgi Tumpalov: "Immerse yourself in the fairy tale luxury of a castle of children's tales and allow yourself to be lost in its magical atmosphere."

This is what we wish you!